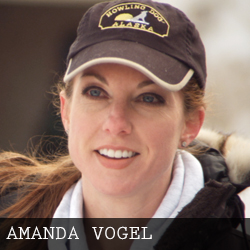 Amanda Vogel is originally from Bay City, Michigan, and now lives in northern Minnesota, just south of the northwest Ontario border. Amanda was introduced to the sport of mushing in 2003, and after a few years of learning the basics from a recreational dog sledding club, she began building a kennel that would allow her to race professionally.

Today, Amanda is the owner and operator of Snomad Racing and is one of the top competitors in distance sled dog racing in the lower 48. Her most recent achievements include being awarded Rookie of the Year, earning a 4th place finish, and passing another Iditarod qualifying race, all of which were accomplished while competing in the nearly 400 mile 2013 John Beargrease Marathon.

Snomad Racing also travels for exhibitions and speaking engagements, works on TV, film, and modeling projects, and puts winter and mushing products to extreme tests for sponsors committed to making the toughest gear and equipment on the market. When Amanda is not training and racing, she is found raising pups, exploring woods and waters, and laughing with good friends. More information about Amanda and the Snomad Racing sled dogs can be found by subscribing at www.facebook.com/snomadracing.