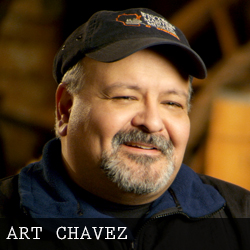 Hailing from the home port of Milwaukee, Wisconsin, Art Chavez has had a life-long interest in preserving the history of the Great Lakes car ferries. He has written extensively on the subject with his articles appearing in publications such as Sea Classics, Anchor News, TRANSFER, and Michigan History. Art has published three pictorial history books on the ferries, and in 2005 won the Association for Great Lakes Maritime History’s Henry N. Barkhausen Award for Original Research in Great Lakes Maritime History. His paper traced the development and design of stern protection aboard the Lake Michigan car ferries and the role these devices (or lack of) played in the sinking of three ferries.

Art regularly gives presentations on car ferries to historical societies and maritime museums, has appeared on History Channel’s Deep Sea Detectives, and has been interviewed by numerous newspapers and radio stations throughout the Great Lakes region.

The highlight of his years of research was discovering a long-forgotten message of distress at the National Archives that was originally placed in a watertight container and tossed overboard by the purser aboard the foundering car ferry Milwaukee in October 1929. Thought lost over the passage of time, this document was found by Art in a musty case file that detailed the marine casualty investigation into the ship’s loss. The case file was at first thought lost in an archives fire decades earlier. The note penned by ship’s purser A. Richard Sadon stated that his ship was “Making water fast. We have turned around and headed for Milwaukee. Pumps are working but sea gate is bent in and can’t keep the water out. Flicker is flooded. Seas are tremendous. Things look bad. Crew roll is about the same as on last pay day. (signed) A. R. Sadon, Purser”

Mr. Sadon and all of his crew mates, roughly 53 in total, perished in the heavy gale a little more than an hour after the message canister was tossed into the stormy seas. The ferry was not equipped with wireless radio.