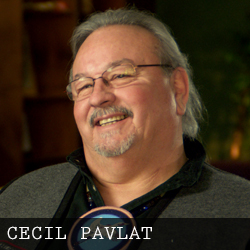 Born and raised in Sault Ste Marie, located in the Upper Peninsula of Michigan, Cecil never found a reason to leave, asking why he would leave such a beautiful and special place?

Cecil has been married to Karol (Weaver) Pavlat for 41 years, and they have a son, Cecil Jr., and a daughter, Keri Lee Pochmara. They also have two grandchildren, Brendan Douglas Pochmara, 11, and Kennedi Anne Pochmara, 8, and wish for more.

“A member of the Sault Ste. Marie Tribe of Chippewa Indians, Native American descent has shaped who I am and how I believe. As Native Americans, we believe we are a Sacred part of Creation, this world, and we are no more important than any other being on this planet we call Mother Earth. When we say ‘Being’ it means each and every thing here: the Water, Winged, Swimmers, Four legged, Crawlers, Plant life, Soil and Rock life, each with its own Spirit. We the two legged are related to each and every other Being here.”

“We now know that all Creator has given us is threatened by our actions; the two legged. We have not cared for our Mother the Earth very well. As Native Americans, our voice is small and not paid attention to. We have always practiced what is now called ‘environmentally friendly’ behavior. We have warned of what will happen and is now happening. We are at the tipping point of no return. What will we leave our descendants, ‘a polluted Earth Mother’? We have failed to care for her in an acceptable manner.”