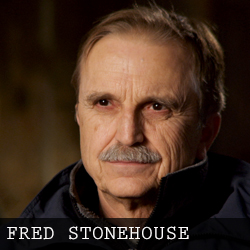 Frederick Stonehouse has authored over thirty books on maritime history, many of them focusing on the Great Lakes and contributed to several others. The Wreck of the Edmund Fitzgerald is a regional best seller. Wreck Ashore, the U.S. Life-Saving Service on the Great Lakes, won a national publishing award and is the predominant work on the subject.

He has been a consultant for both the U.S. National Park Service and Parks Canada and has been an “on-air” expert for National Geographic, History Channel and Fox Family, as well as many regional media productions. Awards for contributions to Great Lakes maritime history have been received from Underwater Canada, Our World Underwater, Marquette Maritime Museum and Marquette County Historical Society. He is also the recipient of the 2006 Association For Great Lakes Maritime History Award for Historic Interpretation. In addition he was named the Marine Historical Society of Detroit’s “2007 Historian of the Year.”

He is President of the Board of the Marquette Maritime Museum, President of the National Board of Directors of the U.S. Life-Saving Service Heritage Association, Vice Chair of the Michigan Port Collaborative and a former member of the Michigan Iron Industry Museum Advisory Board (Gubernatorial appointment). Fred is also active in the Marquette Community and was elected in November 2008 to the position of City Commissioner.