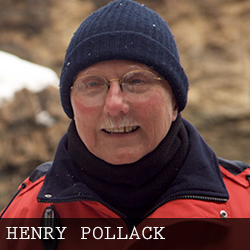 Henry Pollack, a Professor of Geophysics at the University of Michigan, has served on many advisory panels for the National Science Foundation, testified before National Academy of Science and U.S. Senate committees, and provided briefings about climate change to Congress and the White House. He was a Contributing Author to the Nobel Prize-winning Intergovernmental Panel on Climate Change (IPCC) 4th Assessment Report, and is a scientific advisor to former Vice-President Al Gore’s Climate Reality Project.

He has authored two books: Uncertain Science…Uncertain World (Cambridge University Press, 2003) in which he discusses scientific uncertainty and the role it plays in the formulation of public policy, and A World Without Ice (Avery/Penguin 2009) in which he describes the role of ice in shaping Earth’s landscape and climate, and the likely fate of the cryosphere in the face of continued anthropogenic warming.