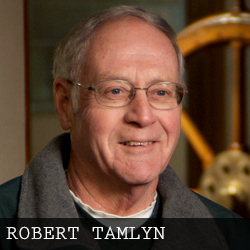 Robert has always enjoyed the water and the Great Lakes and comes from a family of seamen. His father was Captain on the Chief Wawatam until 1970, and his grandfather, grandmother, and brother all worked on the Chief. His wife had uncles that worked on the State Car Ferries and an uncle of his was Chief Engineer of the “Vacationland” which was the last and newest auto car ferry.

After graduating from LaSalle High School in St. Ignace, MI in 1961, Robert enlisted in the Navy and underwent training and schooling as a Machinist Mate, which is an engineering rating. He spent 3 years in the Navy gaining experience with steam engines, pumps, electrical systems, and all aspects of steam ship main propulsion systems, before being discharged as a Machinist Mate Second Class. .

Returning home to St. Ignace in September of 1964, he was looking for employment and obtained a position as a coal passer on the Chief Wawatam, a 340 foot steam-powered railroad car ferry that operated across the Straits of Mackinac. The coal passers job was to shovel coal from the low bunkers out to where the fireman could reach the coal to then stoke the boilers. There were 6 hand fired coal-burning boilers on the “Chief” and 4 coal bunkers, each with a capacity of about 150 tons of coal.

Robert received his Fireman, Watertender & Oiler endorsements from the US Coast Guard using his Navy experience for the necessary qualifications. From coal passer, he advanced to fireman for 2 years before attending a Marine Engineering school in Toledo, Ohio in 1967, eventually passing the exams for 3rd Assistant, 2nd Assistant, 1st Assistant, and Chief Engineer. His last four years on the “Chief” (1974-1978) were as Chief Engineer.

Three triple expansion steam engines of 1500 HP each and 6 scotch, hand fired, water tube boilers allowed the Chief to operate year round hauling railroad cars automobiles across the Straits of Mackinac before the Mackinac Bridge was completed.

He left the Chief in 1978 for employment with the State of Michigan.