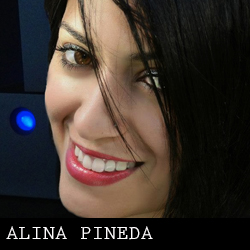 Alina is a visual effects editor and photographer who was born and raised in South Florida, and attended the University of Florida in Gainesville, where she earned a degree in Advertising. After graduating, she started her career at a New York City post-production boutique, where she learned and discovered her passion for the commercial and film industry. While self-taught in various editing applications, she was hired by the industry’s leading visual effects manufacturer, Autodesk, where she traveled the U.S. and South America as a Smoke Applications Specialist doing presentations and training customers in trade shows such as the National Association of Broadcasters in Las Vegas and Brazil’s Broadcast and Cable Show. She also freelanced as an editor & visual effects artist that earned her several film credits in film festivals around the world.

Alina was added to the PROJECT: ICE team in the post production stage, becoming the film’s finishing editor.

Other than adoring what she does as a career, Alina’s three most important passions in life are family, travel and photography. A self-proclaimed, “Citizen of the World,” her close-knit family and a DSLR camera always close at hand, has allowed her to travel around many different parts of the world. Alina is determined to never choose to give either one up.