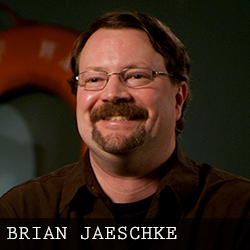 Brian Jaeschke was born and raised in Illinois before he and his family moved to Michigan where he attended Wyoming Park High School. During that time, he earned his Eagle Scout Award with Troop 215. He received a B.S. in Sociology from Lake Superior State University.

After graduating, he worked on Great Lakes freighters as a deckhand, engine room wiper, and galley porter, and he was certified as an able-bodied seaman. In 2001, he enrolled in graduate school and received a M.A. in Maritime History and Underwater Archaeology from East Carolina University.

His master’s thesis is entitled Black Angels of the Ice: The History of Chartered Ice Breaking on the Great Lakes by the Rail Ferries Sainte Marie and Chief Wawatam, and has been published in a condensed version as Wood, Steel and Ice: The History of the Straits of Mackinac Railway Ferries by Mackinac State Historic Parks.

Since 2006, he has been the registrar of historic collections and archives for the Mackinac State Historic Parks. He lives in Mackinaw City, Michigan. Brian co-wrote PROJECT:ICE, and assisted with location selection as well as providing current and historical information about Northern Michigan and the Upper Peninsula for the film.