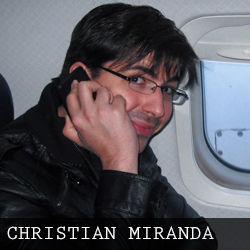 Having been born and raised in San Juan Puerto Rico, Christian had very limited contact with cold weather growing up. Since he did not have the opportunity to enjoy any cold weather related activities he chose to devote his time and energy into his passion of computers and film-making instead of going to the beach. After finishing two Bachelors degrees in Telecommunications and Film he continued his career by working for a high end Post-Production house in Falls Church Virginia and had the opportunity to work on shows for the G4 Network, TLC, National Geographic and the Discovery Channel among others. Currently Christian continues to follow his passion for both film making and IT most recently having produced the short film “The White Heron” that premiered at the Cannes Film Festival in 2012 and is working towards his Masters degree in Information Technology. In 2013 he became part of the PROJECT:ICE team by bringing his expertise of both IT and post-production and is honored to have worked on such an important and exiting project.