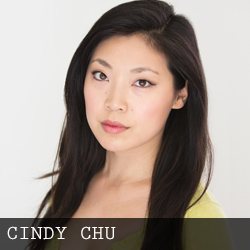 Cindy Chu is an avid fan of documentaries and the green movement, and it was with immense gratitude and excitement that she had the opportunity to work directly with the executive producer and director of PROJECT: ICE, Mr. William Kleinert. It was not only a grand adventure around her beautiful home state of Michigan and around the Great Lakes, but a truly eye-opening and life changing experience. She is even more cognizant now of the importance of the Great Lakes to the health and economy of not only Michigan, but to the world.

When Cindy isn’t traveling the world, Instagramming and “foodpic”-ing along the way, she’s an established SAG-AFTRA actor, recently relocated to Los Angeles. Her last performance was as Nancy Yuan in an upcoming A&E serial pilot, Those Who Kill, opposite Chloe Sevigny (Big Love, American Horror Story) and James D’Arcy (Cloud Atlas, Master & Commander), and directed by Joe Carnahan (The Grey, Narc).