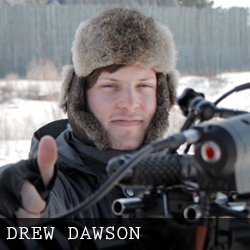 Drew Patrick Dawson, a Beverly Hills, Michigan, native, began his film industry career in Detroit as a camera assistant and camera operator. Joining “PROJECT:ICE” during first round shooting in March 2011, he returned for additional location adventures in 2011 and 2012, including Second Unit Cinematography with the RED Scarlet MX digital cinema camera.

A graduate of Oakland University, Rochester, Michigan, Drew Dawson earned a Bachelor of Arts in Communication, with a Minor in Studio Art.

Noteworthy Second Unit moment: Immediately following a major winter storm in 2012, Drew and “PROJECT: ICE” writer, Brian Jaeschke, were shooting snow-covered terrain at the Historic Mill Creek State Park in Mackinaw City, Michigan. Shooting skyward to capture snow blown off branches by the wind, they spotted an unusual mass high in the treetops above their camera position. Upon closer examination and watching the mass move, they discovered it to be a Porcupine! Until actually seeing pictures, no one back in the Tillinghast Reid WorldWide studio wanted to believe them. As it turns out, North American Porcupines are excellent tree climbers. This one had obviously sought refuge from two feet of freshly fallen snow covering the park and nature preserve.