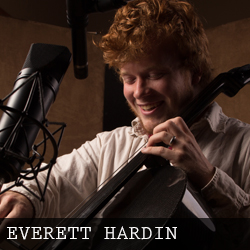 Everett Hardin is a cellist and recording engineer located in North Carolina. He attended Appalachian State University for a degree in Music Industry Studies with a Concentration in Recording and Production, and continues to refine his craft as a freelance engineer and cellist in Boone, NC. Everett divides his time between touring with multiple artists, producing records for independent musicians, playing cello as a session musician, and managing live sound productions. His contributions to Project: Ice were all original works composed specifically for the film in collaboration with Marshall Daniels, a talented multi-instrumentalist. The two were inspired to create music that reflected the beauty, nostalgia, and urgency surrounding the ice culture of the Great Lakes. The recordings feature performances by the two aforementioned in addition to violin performances by Everett’s wife, Caroline. The combined effort resulted in an organic blend of folk music, world music, and minimalism. Marshall and Everett plan on continuing composition for films and were honored to be a part of Project: Ice.