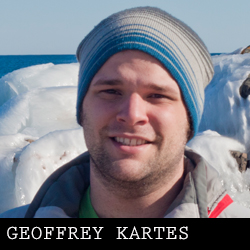 Geoffrey Kartes is a graduate from Northern Michigan University located in Michigan’s Upper Peninsula in the city of Marquette, MI where he received a Bachelors degree in Digital Cinema.

Immediately after graduating from NMU he joined the “PROJECT: ICE” documentary film crew for their second Michigan winter shoot and set out to help capture more about the life and culture that a Michigan winter provides. He first worked as a Production Assistant and later served as a 2nd Unit Director of Photography. “Project: ICE” was Geoffrey’s first feature film work experience.