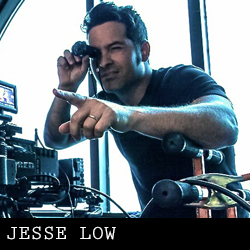 Jesse has worked in film & video production for over a decade. Spending sixteen years of his childhood in a South Pacific jungle, he saw the world as an experience to be shared. Beginning his college career in engineering, he eventually graduated from Loyola Marymount University with a degree in TV Production. With a unique mix of technical and creative insight, Jesse started as an intern at Spyglass Entertainment, and developed into an independent Writer/Director/Producer. From Boston to L.A., from Hollywood features to Indie’s and commercials, he has worked as nearly every position on and off set. He currently is serving as 1st AD on a slate of feature films with CDI in Michigan. Jesse thrives on the challenge of creating original and meaningful stories and turning them into reality.