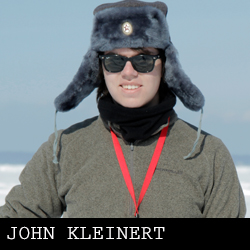 John was born in Traverse City, Michigan, and has had a lifelong fascination with the Great Lakes region. He joined the Project: Ice team during the winter of 2012, on location as a production assistant. It was a great experience for him, and he continued to contribute to the completion of the film by viewing countless rough cut versions over the following year and a half. John currently attends Appalachian State University, studying Music Industries with a concentration in Recording. He enjoys making music and taking in the cool mountain air as often as possible.