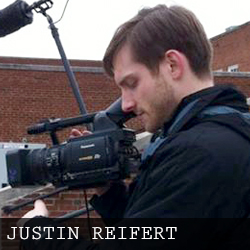 Justin is a native of Kalamazoo, Michigan and graduated from Michigan State University with BAs in International Relations and Russian Language. His Russian skills actually proved useful in his role as a production assistant and researcher on PROJECT: ICE.

Justin is also a graduate of The Institute for Documentary Filmmaking at The George Washington University where he co-produced the short film “Leaving Sharpe”.