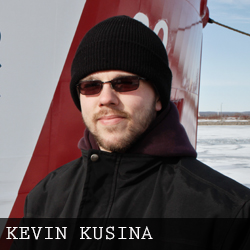 Kevin was born and raised in the Northern Michigan town of Charlevoix, “the Beautiful.” Growing up, he developed a deep appreciation for the Great Lakes by enjoying the great outdoors with friends. After graduating from Charlevoix High School he attended Quinnipiac University in Hamden, CT (Go Bobcats! *rowr*) where he earned a degree in Film, Video, and Interactive Media. After half a year of freelance work in New York City, he became an integral member of the PROJECT: ICE team.

His hobbies include hiking, camping, bacon, rock climbing, CrossFit, U of M football, and spending time with friends and family while responsibly enjoying a fresh Bell’s Oberon (with an orange slice).