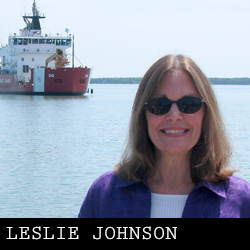 Leslie Johnson makes her film debut as an Executive Producer of “PROJECT: ICE.” An experienced finance and accounting executive, she serves as Chief Financial Officer of Tillinghast Reid WorldWide, LLC, and in similar roles with other established and start-up entrepreneurial ventures. Her financial and operational expertise spans commercial real estate, wholesale and retail antiques and the non-profit sector. Prior to her entrepreneurial endeavors, Leslie served in accounting and finance roles with Blue Cross Blue Shield of Virginia.

Leslie earned her Bachelor of Science in Finance from Virginia Polytechnic Institute and State University in Blacksburg, Virginia.

A Washington, DC, native, Leslie began her own love affair with the Great Lakes in the late 1970s, visiting Drummond and Grape Islands at the north end of Lake Huron. By the early 2000s, she was spending time there every summer. In 2011, she and Director William Kleinert were married in those very waters aboard USCGC Mackinaw, the same United States Coast Guard Ice Breaker featured in “PROJECT: ICE.”